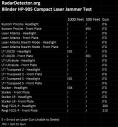 As police laser enforcement is becoming more and more prevalent each day you need the protection of having a high-powered laser defense system to keep you ticket free.

And as of today, the Blinder HP-905 Compact has become my #1 choice.

Blinder has jammed all the performance of the larger and more expensive Laser Interceptor into a more compact and affordable laser jamming system that will save you money and time.

Because of the compact size of the laser jamming heads, the Blinder is much easier to install and is much less noticeable to law enforcement.

This review is based upon my 20 years in law enforcement as a certified police radar instructor and my 17 years being involved in the speed counter measurement industry.

Test vehicles equipped with laser countermeasures were told to count down, '3, 2, 1' as they approached both the 1,000 foot and 500 foot cones. They were instructed to travel at 30 mph. Certified police officers and/or factory laser gun representatives operated the laser guns. They were told not to pan or follow the target vehicle, but to target the vehicle at the different locations. Aiming point was the front license plate.

Laser guns are increasing difficult to jam as laser gun technology moves forward. Honestly, if officers don't get a speed reading while using a laser gun they simply move to the next target. There are plenty of targets!

We can't report the results of LTI Model 'S' as it does not appear on the 18 July 2011 listing, Conforming Product List, of the International Association of Chiefs of Police. The LTI TruCam and Laser Alley presented major problems as laser jammers had difficulty in jamming their guns. The Blinder M27 had the most success in jamming laser guns. Computer programs are available from the laser jammer makers to upgrade individual devices as new laser guns enter the market. As we have said before, the major announcements in the law enforcement market come from laser gun manufacturers. Expect to see more laser gun use in the future. Honolulu does not own a radar gun, only laser. 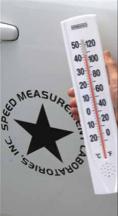 Alexander Roy is an automotive/travel executive, TV personality and holder of several international racing records which must remain secret until the statute of limitations expires. Roy is the only 6-time trophy winner in Extreme Rallysport, winning both the Gumball 3000 and Bullrun in his fake German Polizei BMW M5. Team Polizei has a flawless safety record over 18,000 miles in the US, Europe & Africa. Roy is also producer of "32 Hours, 7 Minutes", a documentary about the world record-setting race from New York to Los Angeles.

Disclaimer: The author is not a paid consultant for any laser jammer manufacturer. The author does not condone speeding, and regrets the terrible state of American driver education. The author has never had an accident while using a jammer.

"When was the last time you prayed the government would improve its surveillance technology? I pray for it every day. Why? Because in the escalating technological war between police and speeders there remains a gap-a legal opening big enough for car lovers to drive through far in excess of posted limits. It's an opening created by the most effective countermeasure ever to enter the speeder's arsenal: the laser jammer.

I've used several different models on numerous legal and semi-legal high-speed rallies, including the Gumball 3000, the Bullrun, and multiple transcontinental races. Despite cruising at speeds of 90-120mph during these events, I ve never received a speeding ticket from a laser-equipped police car. And that's all because of my trusty laser jammers.

Bizarrely, laser jammers are woefully underappreciated by speeders. They're far more reliable than radar detectors, easily concealed, and relatively inexpensive. For speeders living in states where police departments are migrating from radar to laser speed guns, a laser jammer is a mandatory purchase...."

It was around this time that the cops got wise to the promise of laser technology. Laser guns, long used by the military for missile and bomb guidance, offered police far greater accuracy and range than radar guns. At a distance of 1000 feet, a laser beam is only nine inches wide, giving officers 100 percent certainty in identifying target vehicles-something no radar gun could ever do. Police departments took note and quickly realized that the cost of migrating from radar to laser was far outweighed by the near impossibility of fighting a laser ticket in court.

There was just one catch: laser guns can be jammed. Legally.

Although jamming radar is technically possible, there are two huge drawbacks. First, doing so requires a unit as big as a milk crate on the dash or bumper, emitting highly dangerous radio waves that may cause cancer. And secondly, federal law mandates a minimum one-year jail sentence for anyone transmitting radar waves without a license.

Fortunately for speeders, no such law stipulates time in the clink for using a laser transmitter. So for now, there's nothing on the federal level that prohibits the purchase or installation of a laser jammer. So, how do these miraculous little devices work? Let's start by looking at how the fuzz use their laser guns. Police are trained to aim their guns at a car's most reflective surface(s): the license plate and headlights. The laser beam bounces back to the gun, a highly accurate speed reading is displayed, and a ticket issued.

With that modus operandi in mind, the wise speeder conceals his laser jammer(s) on or on either side of the license plate. When a Police laser beam hits the plate or headlights, it also hits the jammer, and it transmits a laser signal that scrambles the gun's speed reading.

It's important to keep in mind that laser jamming and laser detection are not the same thing. All the leading Radar Detectors (Valentine, Bel, Escort) include laser detection, but this is a useless feature. Whereas radar detectors may go off far enough in advance to elude a ticket, a laser detector will only go off when it s too late. Hence the absolute need for a genuine laser jammer.

For my money, that jammer should always be the BLINDER Xtreme. The Blinder comes in two versions: the two-jammer M-20 for sedans and four-jammer M-40 for SUVs and trucks. The Blinder consists of a small dash-mounted control/display unit wired to two or more jammers. The tough part is installation: a basic install may cost $300, but a fully concealed, custom-built version invisible to the average cop may run $1000. (Mine are buried so deep they've passed scrutiny by a group of eight Belgian Highway Patrol Officers at a roadblock.)

What makes the BLINDER so good? Although there are several other products nearly as good and similarly priced - notably the Escort ZR-3 , the Lidatek LE-30 and the Bel 905 - the Blinder s jamming capabilities are significantly better.

** Since this article appeared in Gizmodo.com BLINDER has introduced the new BLINDER X-TREME M27 & M47 which are a significant improvement on the previous models. The sensors have been upgraded and so too has the CPU. The X-TREME 7 series is a generation ahead of the M20 & M40.